A Fort Lauderdale Reading of Let There Be Balloons- May 21st

Posted at 15:42h in Shows and Events by carrie 0 Comments
0 Likes

Please join us for a reading of the Lovewell Theatre Project’s Let There Be Balloons. We are fresh out of a rewrite session in Malmö, Sweden and would like to share a sneak preview with Florida audiences. Come out and listen to our piece and give us feedback before this show goes into FULL PRODUCTION in Fort Lauderdale next January!

A Brief description of the show:
Let There Be Balloons, a musical written by 8 artists ranging in age from 22 to 63, is about Sarah, a rebellious young woman who returns to her hometown after a tumultuous time in Africa, working as a volunteer. Leaving one kind of chaos, she enters a new one as the town is facing a disaster- the closing of the local balloon factory. Sarah’s father is amongst the majority of the town that has been laid off and holds fast his old school thinking. Ultimately, in this new world, Sarah takes a huge leap to restart her own family financially by giving birth to a new family as she becomes a surrogate mother for a gay couple from New York. Will Sarah’s family and the town ever be the same? Is change the only thing that can save them?

This is show is for mature audiences: Language and adult subject matter.

$5 suggested donation at the door 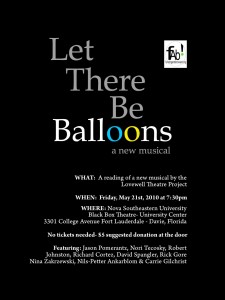