Once Upon The Other Side 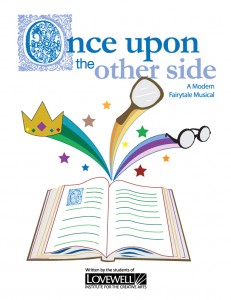 ONCE UPON THE OTHER SIDE: A Modern Fairytale Musical
Fort Lauderdale Junior 2006

Once Upon The Other Side opens in Fairytale Land, home to all of the legendary characters from our favorite storybooks .  This once bright and bristling land has mysteriously become dark and dreary. The kingdom’s ruler, the Queen of Hearts, is very ill and all of the Fairytale inhabitants are  growing weak. After the sorcerer Merlin fails to find a solution, his mother, The Old Lady in the Shoe, takes over. She announces to Fairytale Land that all of their troubles have arisen because children in “on the other side” are not reading fairytales anymore. In order to save Fairytale Land, The Old Lady selects a group of fairytale characters to infiltrate a middle school on the other side, find out why kids aren’t reading , and make them read again.

On the first day of school, the fairytale characters disguise themselves as new students and enter the real world through the Queen’s magic mirror. While the fairytale characters try to adjust to life in the real world, the nerdy members of the after school club T.U.N.A. (Technologically Unified Nerds Association) start to sense that something suspicious is going on around their school.  They plan an extensive investigation in which everyone is a suspect. Soon enough more and more strange things begin to happen.  A cheerleader is mysteriously injured, Snow White becomes cheerleading captain, a fairy wins the science fair, Cupid shoots a few too many love arrows,  and to top it off, the fairytale characters’ cover is almost blown when the three blind mice sneak through the mirror and tryout for mascot auditions!  But as time progresses, the fairytale characters finally begin to fit into student life.  Unfortunately, the disguised fairytale characters still have not come up with a way to make students read more and, communicating through magic mirrors, the Old Lady in the Shoe explains to them that there is very little time left before it is too late.

Meanwhile, T.U.N.A. club members start to wonder whether they’ll ever be able to prove the existence of fairytale characters disguised as students.  Luckily, one of the members of T.U.N.A. finally finishes his masterpiece; the Helga 3000 U.F.O. Detector.  An unlikely new member of T.U.N.A., former cheerleading captain Crystal, realizes that if the U.F.O. detector is supposed to detect unworldly objects, it might also work on fairytale characters. The members of T.U.N.A. decide to wait until the Homecoming Dance, when the entire student body will be assembled together, to expose these student impostors.

Back in Fairytale Land, Cinderella and Tinkerbelle, bitter that they were not selected by the Queen to go to the other side, come up with a scheme  to steal the Queen’s mirror and go anyway.  With the help of the comical Chicken Little, they sneak into the Queen’s castle and steal the magic mirror.  When the Queen realizes what Cinderella and Tinkerbelle have done, she understands that there would be only one last chance to save fairytale land.  She calls upon Chicken Little.

On the night of the Homecoming Dance, the members of T.U.N.A. interrupt the music and dancing to announce that real living fairytale characters have invaded their school and that they have a machine to prove it.  Unfortunately, the student body still doesn’t believe the “nerds” and instead, make fun of them for their crazy idea.  Then suddenly,  Cinderella and Tinkerbelle appear at the dance and blow everyone’s cover.  The students surprised and confused, demand an explanation from the newcomers.  Then, Chicken Little appears and, with the help of Snow White, explains that the fairytale world had chosen to collide with  the other side to figure out why kids weren’t reading their stories anymore.  But while attending the school, Snow White explains, she realized that with so many clubs, sports and classes to worry about, not to mention the cliques, peer pressure, and finding a date to the dance, she too  had trouble finding the time to read.  But sometimes it’s important to  escape all of that pressure with a good book.  The other fairytale characters agree, telling students that books are not only fun but they teach us a lot of great things.  Once the students  learn the truth, the Fairytale characters must go back to Fairytale Land.  The students are reminded that they can see their fairytale friends again anytime, all they have to do is open a book and read.  The students now enjoy reading and, as a result, they save Fairytale Land.

Written by The Students and Staff of Lovewell Jr. Fort Lauderdale 2006