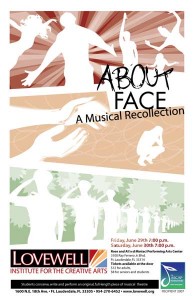 This avant-garde musical narrated by a colorful group of players deals with the broad ideas of war and the effects it has on soldiers and those that are left behind.  There are a group of Wanderers who bring a human element to the story, a group of soldiers who illustrate the mechanics of a conflict, and the group of players who poetically and comically guide us through the story, shedding light onto the many challenges faced by war torn communities.

In a one of the final moments, an emotional reunion takes place between a young daughter and her father who has been away fighting in the war They sing the song “Home in You,” which is in the Lovewell Songbook and can be purchased on iTunes HERE.

About Face is for rent in our catalogue of new works.

Watch About Face on Vimeo NOW!

Conceived, written and composed by the students and staff of Lovewell Institute for the Creative Arts 2007 Fort Lauderdale Teen Workshop.