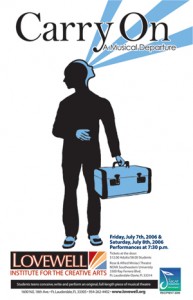 CARRY ON: A Musical Departure
Fort Lauderdale Teen (2006)
This show also had a full production in Salina, Kansas at Sacred Heart High School in January of 2008

Synopsis:
Where do we go when we die?  Does anyone really know? This entertaining and insightful show looks at the challenge of handling one’s life after death. Upon leaving this world, people find themselves in a Transport faced with all of the baggage that they have accumulated in their lifetime. Carry On makes light and sense out of a very heavy topic by touching on beliefs from all walks of life and respecting each one as it does so.  There are characters who (refusing to let go) have been stuck in the Transport for an eternity, a specialized staff to aid passengers in each station (not to mention a very busy complaint desk), and characters who pull at your heartstrings as they are forced to leave their loved ones behind.  This show will make you think- all the while “lifting you up when your spirits are down.

Download the song from this show where in a chaotic moment, one of the Guardians in charge is discovered missing and a through a comedic verbal tap dance, a younger and high strung Guardian is forced to convince the stranded “passengers” that “Everything’s Divine.” (Download here on iTunes.)

This show is available for rent in our Cataloge of new works.

Conceived, written and composed by the students and staff of the LovewellInstitute for the Creative Arts 2006 Fort Lauderdale, Florida TeenWorkshop.