One of Mind, One of Heart

ONE OF MIND, ONE OF HEART: The Musical Tale of Veros and Cordesia

In Partnership with Short North Stage 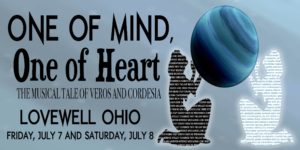 Thousands of years ago, The Twin Gods of Logic and Emotion split the World in two. Now, the modern worlds are experiencing a sense of Loss for something they can’t name. When a Mythological Portal is discovered between the two worlds, Logic and Emotion collide. Can the two exist as one, or will their meeting lead to destruction?

Written and composed by the students and staff of the 2017 Lovewell Columbus, OH Lovewell workshop (June 21st, 2017-July 8, 2017) in partnership with Short North Stage

Watch One of Mind, One of Heart on Vimeo NOW!