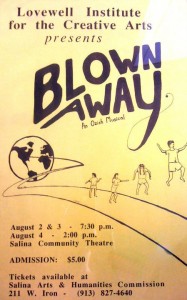 The bumbling high school drama teacher is directing his own dreadful adaptation of the Wizard of Oz. The drama students are forced to be in the production but none of them want to go to rehearsals. Ryan, the school’s best actor playing the Tin Man, encourages the other cast members to devise their own version of “the Oz myth” – one with songs and dances that speak their own language. Ryan falls ill and starts missing rehearsals. News that he has AIDS splits the school when he recovers enough to return to classes. Several friends remain loyal and help him through his last triumphant performance. Ryan helps his friends find a new level of tolerance and understanding.