YO, JULIET (1997)
Ft. Lauderdale, FL in cooperation with the Boys & Girls Clubs of Broward County (teens) 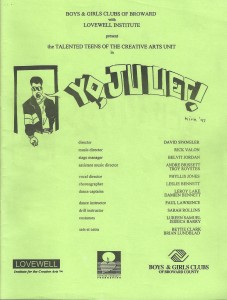 A military academy is called upon to provide male actors for a production of Romeo & Juliet being staged by a nearby girl’s school. After a few rough rehearsals of translating King’s English into Ebonics, the teenage cadet cast in the role of Romeo falls in love with the young art student who plays Juliet. Sub-plots involve the failed romance between the military officer in charge of the academy and a graduate of the girl’s school who has become a famous recording star. Things get difficult when “Romeo” tests positive for AIDS. “Juliet” stays by his side and the show goes on. Near the end of the performance, there is a startling revelation that raises the question “how many have to die before we can learn to love”. Romeo turns Shakespeare’s tragedy into a triumph.