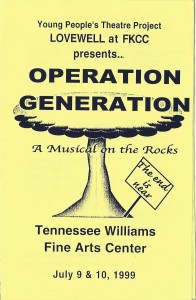 The millennium approaches and anxiety is running high. In a top secret experiment, the government has cryogenically frozen prime examples of typical citizens sampled from each decade of America’s history. As they are ceremoniously unfrozen on the last night of the millennium, each decade comes to life revealing the nature and evolution of the American culture. After the presentation, the audience is to be turned into the next experiment involving controlled breeding and study of the Ebola virus on human subjects. A group of social and religious activists are gathering out side the theatre and threatening to violently abort the experiment. Forces of good and evil are played out in a curious mix of humor and high drama as the activists rekindle the passion of the American people to fight for freedom and set the government straight.